Music intervals and degrees of the Major Scale

Today we are going to learn what intervals and scale degrees are. This will help us understand the difference between, for example, major and minor interval sounds, which usually account for the biggest differences when we hear a certain scale or sequence of sounds.

In order to understand this, let’s start by picking up the C major scale: 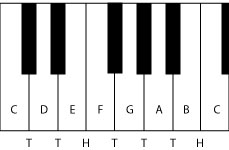 In the scale of C major the sequence of Tones and Half-tones is shown by the Ts and the Hs written below the piano roll. In this sense, every time we think about a Major scale, we should have in mind the sequence of tones and half-tones: T – T – H – T – T – T – H.

Having this clear, we can go on thinking about the relation between the root note of the scale, the C in this case, and the other notes. This relation is very important, as it gives each scale a peculiar sound, a character of its own. Handpan scales rely very much on these differences, and in this lesson we are going to learn how this works, applied to the Major scale.

Using the C as our pivot, we are going to count how many tones or half-tones there are between the root note and the other notes. Let’s start:

These intervals make up the main features of a major scale. If we decided to change one, then we would have a different scale, with a different feeling and character. This is why we often refer to major or minor scales, for examples. We’ll understand this better when we’ll learn about modes and modal scales.

For now, just try to familiarize with the terminology, and listen to the sound of major and minor scales, to feel their different taste and mood.