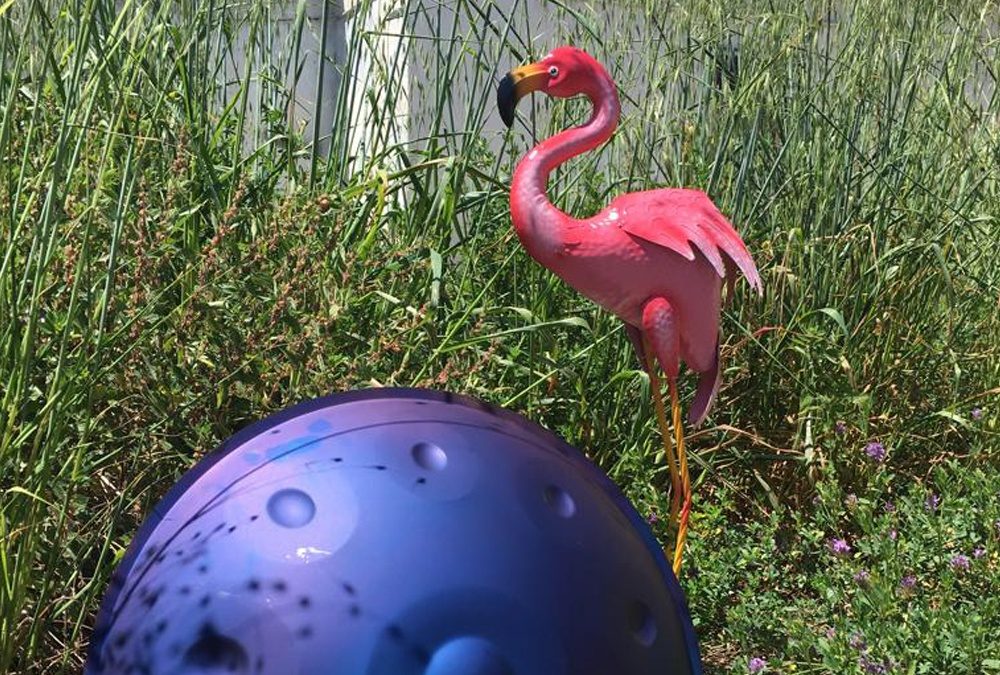 For this third lesson, I’ve decided to focus on the analysis of the handpan I am playing at home, a version of an Hijaz scale that has the following notes:

According to the disposition of the notes, the scale is an A Phrygian Dominant mode, or and A Mixolydian b2 b13. This mode is the mode of Flamenco music, with its root on the A3 and its resolving 5th on the Ding. It comes from the scale built over the fifth degree of a D harmonic minor scale. When I started playing with this scale, I was uncertain on how to harness the potential of this combination of notes. I treated the handpan mostly as a percussive instrument and began developing my own way of intending the rhythm over it, as you can read in the Lesson 2 (we’ll get back to rhythmic patterns in the next lessons).

So, once a basic rhythm was set, I felt the need to understand the relation among the notes I have available on the shell. First by ear, playing and finding interesting cadences and chords. Then, after some time, I understood I have to get to study the harmonic minor scale and specifically the mode I have, the Phrygian Dominant.

If you are not familiar with chord building, check this side-lesson to know more!

The first thing it occurred to me was making a list of the chords, which is harmonizing the scale the shell is making available. As its layout is fairly simple, with a full A Phrygian Dominant scale with an added lower 5th on the Ding and the repetition of the root note an octave above the A3, I took the harmonic minor scale and wrote the main 7th chords, as follows:

Aside from this first combination of chords, there is one other that can be built by either altering the 3rd (the case of the BbD which can become a Bbm Maj7). Moreover, there is also the possibility to use the additions, those notes aside the specific chord tones that add some flavor to the chord. We’ll get back to addition in another lesson, as this one is about exploring the basic chords and practicing the movements over the shell.

So, the first thing I am practicing is playing each chord with both hands, every time ascending from the root note and getting back to lower chord tones. This seems a little weird, as some chord inversions are not always the best, like putting the 3rd as the lowest note, but this exercise has just the aim to memorize the chords over the handpan, and of course the position of the single notes.

This is the basic movement we have seen on YouTube videos; many musicians employ this sequence in a number of songs. You can watch an example of this exercise in the following video, where I am playing the sequence of chords over my (E) Hijaz handpan:

In this last clip, I am just fooling around, playing two simple progressions of the chords to give you an idea of how neat a sequence can sound.